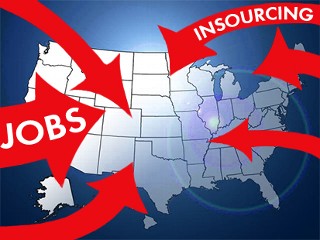 Outsourcing often takes it on the chin as the reason for job losses and the sorry employment picture in the U.S., even by President Obama. But that formulation, which makes for an easy applause line during a speech, is way too simplistic and mostly wrong.

Here’s the situation: A recession—now known as the Great Recession—began in late 2007 and was declared over in mid-2009 by the National Bureau of Economic Research, which tracks business cycles. But some 15 months later, the nation’s unemployment rate sticks stubbornly at nearly 10 percent, with more than 15 million Americans out of work. (Try convincing those people the recession is over!) Another major part of this story is that nearly 12 million people—about 7.5 percent of the U.S. population, are ready, willing and able to work but have given up looking for a job or are working part-time because they can’t find full-time work. No doubt many of you have family and friends caught in either or both of these situations.

While Gross Domestic Product is recovering, it’s so sluggish and slow that it has not reached its pre-recession growth rate, which is a really bad indicator about the future health of the economy because by this point in the recovery cycle  of all nine of the previous recessions since World War II, GDP had reached its former peak.

What we are apparently seeing after the economic and financial crises that have buffeted the nation is the birth of a new economy, maybe one that will resemble something we fondly remember, but maybe not. Maybe full employment (roughly 4-5 percent unemployment) is another measure that will be a fond memory.

In any case pointing to outsourcing as the major culprit for this parlous and perilous U.S. jobs situation is misguided and reveals a lack of understanding about the way a globalized trade economy works. This misunderstanding is evident as the media can’t even get the basic terms right.  The term for sending jobs overseas is called offshoring, not outsourcing, but that’s a distinction rarely made in the mainstream media.

When a company lays off workers in the U.S., it’s wrong to assume the jobs go overseas. It’s a scare tactic formula that makes for alarming news stories from the Associated Press, for example, but it simply does not equate. For many businesses, those jobs are just gone – the victims of belt tightening. For others, outsourcing may mean shifting the work to someone who is better, faster or cheaper (in many cases all three!); while the jobs are outsourced, they are not offshored.

One can even convincingly argue, as recent articles have in the Huffington Post and The Wall Street Journal, that outsourcing actually creates jobs. A lot of jobs.

The recent WSJ op-ed said, “The fact is that for every job outsourced to Bangalore, nearly two jobs are created in Buffalo and other American cities.” This article, and others like it, commented Huffington, “asserts that while outsourcing may send some jobs overseas it simultaneously creates more jobs and that the net is positive job creation.”

After its own in-depth examination of the numbers, Huffington said: “We might easily conclude that outsourcing creates growth and jobs in the United States.”

Granted these articles employ a blur of statistical data, and we all know that statistics can  be manipulated to prove almost anything, but the argument for outsourcing and job creation seems much more compelling than not.

So while we’re talking about an emerging new economic paradigm, let’s not forget to mention the paradigm shift that Vested Outsourcing brings to the table in terms of collaboration, innovation and mutual planning for desired results.

Vested Outsourcing takes outsourcing to a whole new level – helping companies get better, faster and cheaper. When you can work with a supplier to do that, why NOT outsource!  The job doesn’t go away, it gets shifted to the company where the work has the most value. I call that good business sense.

I recently prepared a letter to the president about all this, which I’ll share with you from my soapbox here next time.