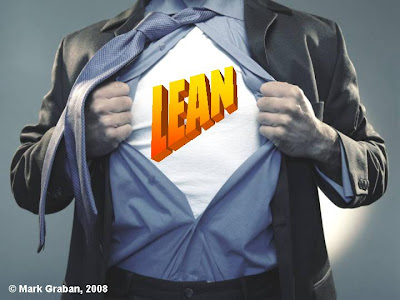 I wanted to share some recent wisdom from Jim Womack, founder and chairman of the Lean Enterprise Institute, and a chief maven for the Lean concept.

He sends out emails on a regular basis, and one in particular, “Making Everyone Whole” talks about the difficulty that organizations often experience in trying to create lean value streams.

After visiting various companies on three continents, Jim said, “Walking through any process, good or bad, seems to put a smile on my face for one of two reasons. If the process is awful it’s easy to see how it could be better. And, if it has already been significantly improved from its original condition, I’m both pleased by the progress and aware that the next layer of waste is now visible and ready for elimination.”

But he also found himself frowning in some cases: “This happened when I heard improvement teams complaining about the difficulty of gaining and sustaining the engagement and cooperation of everyone and every part of the organization touching the process being improved.”

It’s one thing to gain the initial buy-in, cooperation and collaboration that’s essential for a project; it’s quite another – and equally essential – to sustain those elements for the long haul.

As an example, he wrote that “on one walk through an information processing activity in a large service company, the team was complaining about the resistance of the company’s information technology department to substantially modifying the company-standard software package in order to support the improved process.

“In another case, a team was bemoaning the resistance of experienced financial service workers to sharing the details of how they worked their way around the problems in the existing process. In both cases I found the teams defaulting to the most comfortable explanation for the lack of engagement: Bad people.”

As Jim points out,  it’s not typically  “bad people” that cause the problem – it’s the natural and universal human resistance to change, and especially changes to processes or operations that affect people’s jobs and livelihoods.  He adds, “In fact, those affected are reacting quite rationally to protect their interests because they would be hurt by the changes.”   Jim points out the real problem is a lack of discussion and clear agreement between the heads of IT, HR, and the improvement teams about how winners could compensate losers to make everyone whole.”

Jim concludes with a very wise and in my opinion highly accurate statement. “My experience over many years is that making visible efforts to make everyone whole…is the best way to make and sustain big improvements in core processes.”

The Vested Outsourcing approach acknowledges that change in business, as in life, is inevitable and that collaborative and flexible relationship frameworks that build trust and plan for mutually beneficially outcomes by implementing the Five Rules will minimize intransigence and blaming attitudes when change comes your way.

Incorporating the principles of focusing on outcomes, not transactions (Rule 1) and focusing on the what, not the how (Rule 2) will give an organization and its people the mechanisms they need to adapt.

For many organizations, committing to Vested Outsourcing is a major change in and of itself that by default requires a mindset amenable to and accepting of change, a plan for coping with change and a ‘What’s in it for We’ approach when it occurs.