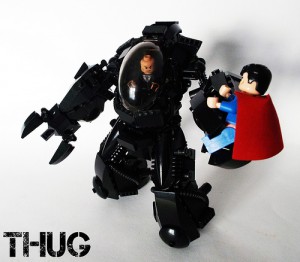 Patent troll Erich Spangenberg has some surprisingly good advice for would-be collaborative negotiators: “Once you go thug, though, you cannot unthug.” How true!

Spangenberg, owner of IPNav, brings law suits alleging patent infringement against companies on behalf of the “little guy.” An aggressive form of negotiation is the name of his game—not building long-term relationships. But, the above quote still rang true for me.

Spangenberg was interviewed in a July New York Times article, “Has Patent. Will Sue.” He said he tries to open conversations in a diplomatic tone, but if that doesn’t work, he “goes thug.” That phrase struck me.

I was a litigator in Chicago for the first 10 years I practiced law. I know all about “going thug” on the other party. In fact, I have some —ahem— fond memories of “going thug.” I was young, a lot less mature, and not trying to build long-term relationships. I was trying to win!

The Problem with “Going Thug”

When you (or someone on your negotiation team) “goes thug,” there is no going back. It’s like throwing a bomb into the conversation. There is emotional shrapnel, destruction of good will, and no trust left whatsoever.

The problem is that people who’ve not negotiated extensively in many different circumstances think that they can “go thug” and then go back to being diplomatic. It’s the good cop/bad cop hardball negotiation tactic I describe in Getting to We.

Co-authors Kate Vitasek, David Frydlinger, and I work with companies that want to establish long-term, highly collaborative relationships. We’ve noticed that people with the best intentions will revert back to hardball negotiation tactics when faced with pressure to get a “good deal.”

Tactics must support —not undermine— the collaborative atmosphere during negotiations. There are clear distinctions between negotiation tactics that are premised upon the conventional “What’s In It For Me” (WIIFMe) mindset rather than the “What’s In It For We” (WIIFWe) process of Getting to We. Many conventional styles, strategies, and tactics undermine trust and conflict with the six guiding principles outlined in Getting to We: The Guiding Principles.

Are You “Going Thug”?

Here is something to think about when you’re trying to negotiate a highly collaborative relationship.

Do I, or my colleagues, use negotiation tactics that overtly seek to:

If you answered “yes” (or even “sometimes”) to these questions, it is time to rethink the tactics you’re using, because you are “going thug.” Remember, as Spangenberg says, once you go thug, you cannot go back. And he should know.