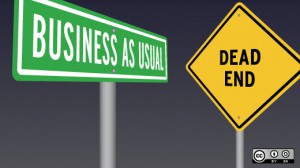 In my last blog, I noted that change is never easy. Attempting to drive change in a procurement organization is no different.

“Procurement processes have stayed the same for years (or even decades, in some cases) because change is hard, especially when it involves new technology, leadership or training,” she writes.

Rizza’s five common challenges that stand in the way of transformation success are:

5. Not having a flexible plan

Of course any one of those can be deadly to the change process but perhaps the most important, at least to me, is the lack of leadership buy-in. Without it, nothing much positive can happen, but with top-level buy-in the other four factors can fall into place.

So how did Dell get top level buy-in when they were trying to transform how its outsourced their reverse logistics operations? Dell actually organized a book club to study the Vested approach during the early stages of the transformation process with GENCO. Dell personnel were assigned as chapter champions; conference rooms were filled with small groups, digesting Vested Outsourcing: Five Rules That Will Transform Outsourcing.

In the Dell case, the key to getting the buy-in needed was to help everyone think about, understand and imagine the possibilities of the Vested mindset. If you get people to actually read some material—and talk about it—the entire group will talk themselves into Vested. When Dell did the book club; they more or less talked themselves into saying it would be a good thing to do a pilot.

The lesson is apt: calling whatever change you are considering a “pilot” project is a good idea; it makes it safe for one thing, because it’s not a plan or even a proposed plan that everyone has to suddenly digest. Those comfortable with the pilot will proceed, while naysayers can safely get out of the “pilot’s” way. The pilot can then take on a life of its own—once its value is demonstrated—and eventually get the needed top-level buy-in.