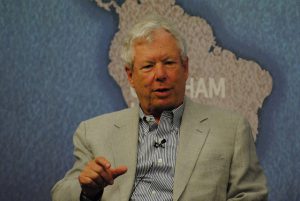 For those not familiar with Thaler and his work, I highly recommend his book, Misbehaving: The Making of Behavioral Economics. In it he shares how behavioral economists challenged traditional thinking over the last forty years. Thaler’s Nobel Prize is icing on the cake when it comes to legitimizing behavioral economics.

I also recommend Thaler’s best-selling book (with Cass R. Sunstein) Nudge (2008) in which the concepts of behavioral economics are used to tackle many of society’s major problems.

If you want a shorter read, a check out this  New York Times article by Thaler published on May 15, 2015, “Unless You Are Spock, Irrelevant Things Matter in Economic Behavior.” It offers an engaging window into his thinking. At one point he writes, “Supposedly irrelevant factors, or SIFs, matter a lot, and if we economists recognize their importance, we can do our jobs better. Behavioral economics is, to a large extent, standard economics that has been modified to incorporate SIFs.”

The Nobel committee expanded on three of his key concepts when it announced the award:

“Limited rationality: Thaler developed the theory of mental accounting, explaining how people simplify financial decision-making by creating separate accounts in their minds, focusing on the narrow impact of each individual decision rather than its overall effect. He also showed how aversion to losses can explain why people value the same item more highly when they own it than when they don’t, a phenomenon called the endowment effect. Thaler was one of the founders of the field of behavioral finance, which studies how cognitive limitations influence financial markets.

“Social preferences: Thaler’s theoretical and experimental research on fairness has been influential. He showed how consumers’ fairness concerns may stop firms from raising prices in periods of high demand, but not in times of rising costs. Thaler and his colleagues devised the dictator game, an experimental tool that has been used in numerous studies to measure attitudes to fairness in different groups of people around the world.

“Lack of self-control: He showed how to analyze self-control problems using a planner-doer model, which is similar to the frameworks psychologists and neuroscientists now use to describe the internal tension between long-term planning and short-term doing. Succumbing to short-term temptation is an important reason why our plans to save for old age, or make healthier lifestyle choices, often fail. In his applied work, Thaler demonstrated how nudging – a term he coined – may help people exercise better self-control when saving for a pension, as well in other contexts.”

For fans of the Vested movement, you will immediately recognize the importance of Thaler’s work and why we embed some of his teachings into our work—especially our Collaborative Contracting course.