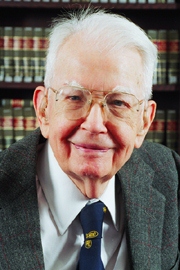 Nobel laureate Ronald Coase, a giant of modern economic thought and whose ideas about transaction costs and the nature of companies are a foundation of Vested principles, died this week in Chicago. He was 102.

In “The Nature of the Firm,” which was developed and written while he was still an undergraduate and published in 1937, Professor Coase revolutionized economists’ understanding of why people create companies and what determines their size and scope.

He introduced the concept of transaction costs — the costs each party incurs in the course of buying or selling things; this set the stage for an entire school of economic thought and theory called transaction cost economics.

Professor Coase asserted it was not enough to include only production and transportation costs as the main costs of doing business; businesses needed to also consider the cost of entering into and executing contracts. This boils down to a mathematical analysis—in other words Do the Math!—and his breakthrough thinking was even given a mathematical name—the Coase theorem.

His lesson: think about the total cost and not just the price/budget of the contract or the work that is outsourced. His work is an essential part of the foundation of Vested’s collaborative and shared value approach to business relationships.

The inclusion of contracting and contracting costs into the mix of a firm’s organizational structure and accounting helped him win the Nobel Prize in Economics in 1991 and helped create the conditions for outsourcing to become a normal and major part of a firm’s strategy.

Over the years I’ve written about Professor Coase frequently in articles and blogs, most recently last December (shortly after he turned 102) when I blogged about his Harvard Business Review article, “Saving Economics from the Economists,” which addressed the current “separation” of economics from the working economy.

Professor Coase said that “economics as currently presented in textbooks and taught in the classroom does not have much to do with business management, and still less with entrepreneurship.” He continued that the extent “to which economics is isolated from the ordinary business of life is extraordinary and unfortunate.”

Today’s modern market economy, Professor Coase continued, “Requires an intricate web of social institutions to coordinate the working of markets and firms across various boundaries. At a time when the modern economy is becoming increasingly institutions-intensive, the reduction of economics to price theory is troubling enough. It is suicidal for the field to slide into a hard science of choice, ignoring the influences of society, history, culture, and politics on the working of the economy.”

Coase was a guiding force behind the New Institutional Economics. NIE is an interdisciplinary enterprise combining economics, law, organization theory, political science, sociology and anthropology to understand the institutions of social, political and commercial life. It borrows from various social-science disciplines, but its primary language is economics. NIE’s goal is to explain what institutions are, how they arise, what purposes they serve, how they change and how – if at all – they should be reformed. In addition to Coase, Oliver E. Williamson, Elinor Ostrom and Douglass North are founding members.

One of the ideas NIE espouses is that institutions abide by a set of principles and actions to ensure that what benefits one will benefit all. Therefore, in a free market businesses are encouraged to maximize their own gain for the benefit of society, as long as businesses work within a framework of institutions that provide collaborative, win-win principles that everyone follows. By the way, that’s also the Vested way.

Economic science—and Vested!—is forever in his debt. Thank you, Professor.