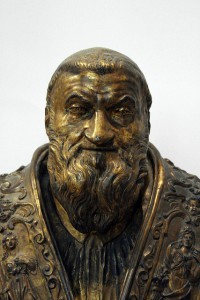 There’s a corollary to those two posts for me that was prompted with the news this week that Popes John Paul II and John XXIII were canonized as saints in the Catholic Church: the devil’s advocate.

During his short tenure as pope in the sixteenth century (1585-1590) Pope Sixtus V established an office, called Defender, or Promoter of the Faith, which was popularly known as the devil’s advocate. The devil’s advocate was a canon lawyer appointed by Church authorities to be the voice of dissent and argue against the canonization of a candidate for sainthood. It was this person’s job to take a skeptical view of the candidate’s character, to look for holes in the evidence, to argue that any miracles attributed to the candidate were fraudulent, and so on. (Ironically, it was Pope John Paul II who reduced the power and changed the role of the Defender of the Faith office in 1983. The reform changed the canonization process considerably, helping John Paul II to usher in an unprecedented number of elevations: nearly 500 individuals were canonized and over 1,300 were beatified during his tenure as Pope, compared to only 98 canonizations by all of his twentieth-century predecessors.)

There is a place to formalize the role of the devil’s advocate in the executive boardroom—someone who makes sure the elephant in the room is released and that opinions and ideas expressed are addressed and respected.

The idea is to encourage the free flow ideas and innovation without inhibitions, no matter which way they go, as I wrote in a recent Information Week opinion column about creative conflict, “5 Ways to Turbocharge Innovation.”

Xerox’s PARC laboratories used the devil’s advocate approach successfully—where employees were asked to defend their ideas in a formal debate session with selected engineers and scientists. The goal was not necessarily to win arguments, but rather to stimulate debate – ultimately making the idea better. Equally important was for attendees to be exposed to new ideas that would percolate throughout the organization and perhaps spawn even more innovative ideas.

I’ll make one point: managers can appoint someone to the role of devil’s advocate but I recommend they ensure the task is shared, otherwise an individual might be seen to always be negative.

Creative conflict and creative disruption are important parts of the drive for innovation and creativity in business relationships by welcoming both the elephant and the devil’s advocate to your governance framework.