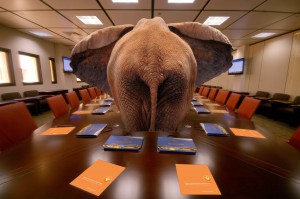 At some point we all face an issue or situation that’s commonly called “the elephant in the room”: an obvious truth that is either being ignored or not addressed.

The expression arises frequently in business situations where there is a problem or risk that no one wants to talk about.

I teach that this is a potentially disastrous strategy – ignoring a problem never makes it go away, for one thing. It’s like when the “check engine” light comes on; something needs to be addressed because the car won’t fix itself.  Waiting is risky – and the problem just gets worse.

The elephant in the room is also a major innovation inhibitor, as I wrote in a recent Information Week opinion column, “5 Ways to Turbocharge Innovation.”

So why don’t people allow elephants in the room? Regardless of the reason why we zip up instead up speaking up, it’s understandable that many feel uncomfortable—and perhaps consider it too risky—to openly discuss an “unspoken truth” that may be touchy, unpopular or off the reservation. It’s especially understandable in regions of the world with high unemployment.

My advice for preventing the elephant in the room syndrome is to encourage creative conflict. Actively putting the elephants in the room closely coincides with the concept of having an official devil’s advocate. The idea is not to get too sanguine when discussing ideas and dealing with problems with your team – a little disruptive thought and devil’s advocacy can go a long way to keeping everyone on their toes and getting to the root of the problem more quickly.

It’s much healthier to create an environment and organizational culture that encourages people to challenge the conventional wisdom on sensitive topics.

An elephant in a room is impossible to overlook—so don’t overlook it! Think of it as your dutiful obligation—that you have a “check engine” light illuminated on your corporate dashboard. After all – you never know what kind of creative solution you can get to if you spend all your time burying your head in the sand and pretending the elephant in the room simply does not exist.

Who knows – the solution and a major innovation might also enter the room once you have escorted the elephant out!