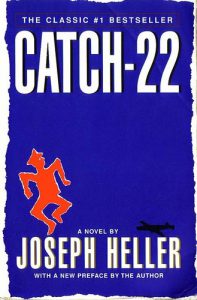 A Catch-22 is a paradoxical, no-win situation that comprises contradictory and circular logic. For instance, someone needs a pass to enter an office building, but in order to get the pass you have to visit an office in that building.

The term was coined by Joseph Heller in his WW II novel of the same name that describes how an Air Force flyer, Yossarian, tried to deal with the absurd bureaucracy he faced.

In the novel, Doc Daneeka, an army psychiatrist, invokes “Catch-22” to explain why any pilot requesting mental evaluation for insanity—hoping to be found not sane enough to fly and thereby escape dangerous missions—proves that he is fact sane by making the request, and thus cannot be declared insane.

So Yossarian could not contend he was “crazy” to avoid a bombing run because his strategy was in fact all too sane!

Being labeled as “crazy” often has a negative connotation. But there’s also an old saying, “crazy as a fox,” that implies just the opposite – the person is not crazy at all, but rather highly cunning. In Yossarian’s case being cunning lead him directly into the Catch-22 moment.

But does being “crazy like a fox” enable us to escape those crazy Catch-22 moments when we feel stuck in a no win situation? I’d argue yes. In the business world an idea that seems crazy or counter-intuitive might be rejected at first, until upon reflection it makes sense—perhaps different sense from the norm or the old way of doing things. Isn’t this what innovation is all about?

Innovation is when you find better, faster, or cheaper ways to achieve something.  Simply put, today’s toughest problems may seem like a Catch-22 on the surface, a no win, throw up your hands and give up kind of moment. But if you look beyond the obvious and toss out a crazy idea, you might just see it leads you to something really innovative. Take for example Procter & Gamble’s “wicked problem” to outsource their facilities management operations, with the requirement that no employees would be fired or get pay cuts. This took a different mindset—a Vested mindset—that led to an award-winning outsourcing agreement with Jones Lang LaSalle.  (Read more on the “wicked problem” concept here.)

Another saying goes, “the more you look at something, the more it changes.” I say

A crazy idea that demands innovation for the solution.