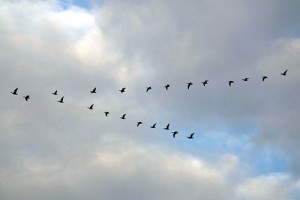 Recent research described in USA Today that relates how and why certain birds fly in a perfect V formation is fascinating.  But it is also telling in terms of how migrating birds work together to reach their goal with the lowest amount of energy.

Scientists did the first extreme close-up of GPS-equipped northern bald ibises flying in a V formation to track exactly what the birds are doing in flight to help them maintain their “V” position.  The result?  Extreme collaboration on the fly – so to speak.  And a side benefit?  Scientist say that according to aerodynamic theory, the birds are able to achieve a precise formation while at the same time minimizing their energy use.

The article says the birds position themselves and time their wing beats so precisely that it “requires each bird to monitor subtle changes in its wing mates’ flight and alter its own path and stroke accordingly.”

Here’s the science part as outlined in the USA Today article:

When the researchers analyzed the data from 14 young ibises flying in a V, they found that each ibis placed itself an average of four feet behind the bird in front of it and at an average angle of 45 degrees. That’s just the configuration needed for individual birds to catch the rising air generated by the flapping of the bird in front of it. By capturing this rising air, or “upwash,” the bird can stay aloft more efficiently. Measurements of the ibises’ flaps showed the birds time their wing beats so precisely that they continually catch the upwash left behind by the moving wings of the bird ahead. That means it precisely regulates its stroke so its own wingtips trace the same path in the sky as the bird in front.

So the next time you look up in the sky and see birds flying in their famous “V” formation, stop and ponder the extreme collaboration that enables them to constantly monitor their environment and drive continuous improvement as they work together to reach their goal.