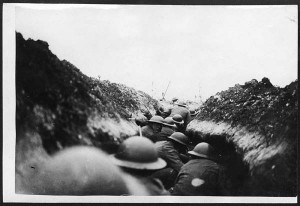 This month marks the 100-year anniversary of the start of the World War I – a military, political and human disaster of epic proportions that defined the twentieth century.

A recent Wall Street Journalcolumn “The War that Broke a Century,”  focused on the leadership (or really the lack of leadership) aspect of WWI.

For those who are not historians, Peggy Noonan reminds readers that the major players: King George V of England, Czar Nicholas II of Russia and Kaiser Wilhelm of Germany were cousins — they were grandchildren of Queen Victoria.

Talk about a dysfunctional family dynamic that cost 10 million lives! Their arrogance and inability to lead—and stop the carnage—is a great tragedy. In fact, the brilliant military historian John Keegan noted “the war to end all wars” was anything but that—WWI led directly to the rise of the USSR, Adolph Hitler, World War II, the Cold War and unresolved regional conflicts and tensions in the Middle East and the Balkans that continue to this day.

Keegan explained, “The First World War created the modern world.” WWI did not really end anything—instead, as Keegan said, it was a ferocious conflict that unleased mechanized warfare and mass death on an unprecedented scale.

At its most basic level WWI was a failure of leadership, a complete miscalculation of what collaboration and inter-locking sets of political alliances were supposed to accomplish: cooperation and the avoidance of conflict.

As I was brushing up on my history this week, I was reminded of a post I did in 2011 about the Coldplay song “Viva La Vida.” Chris Martin, Coldplay’s lead vocalist, sings about the arrogance that’s always a prelude to a fall: “I used to rule the world/Seas would rise when I gave the word/Now in the morning I sleep alone/Sweep the streets I used to own.”

Back in 2011 Martin’s words made me think about the economic and financial catastrophes we’ve lived though. And as I write this 100 years after the guns of August began firing and broke a century, the words ring equally true: dishonesty and arrogance is always a prelude to a fall, whether in Flanders Field, the Somme, Wall Street or the executive boardroom.

Image: Infantry waiting to attack during WWI; National Library of Scotland via Flickr