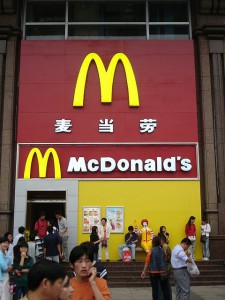 OSI Group LLC, a leading supplier of beef to fast food giants McDonald’s, KFC, and Starbucks – fell under scandal when production at a Shanghai Husi plant was suspended by Chinese officials in July after workers were caught repackaging and selling chicken and beef past their ‘sell-by’ date.

No health issues were reported due to the incident, reported July 20 on CNN, which cited a Chinese TV station news report. Needless to say, the episode has given the fast food chains that use the OSI plant in China a black eye.

“Expired frozen meat is really a food quality issue more than a food safety problem,” Fortune reported in a Sept. 2 article about the OSI scandal. However, it has caused public relations and supply chain issues for OSI’s customers. It was especially painful to McDonald’s, which has earned top marks from government regulators for having the world’s safest supply chain.

McDonald’s – also known for it’s legendary assured supply (have you ever seen McDonald’s run out of a Big Mac™ or French Fries?) – ran out of beef supply in some parts of China after OSI’s production was shut down.

As a result, The Wall Street Journal reported McDonald’s cut ties with OSI in China in the aftermath of the expired-meat scandal. But how do you recover quickly from losing a key supplier such as OSI? If you are McDonald’s you turn to your legendary “System”—partnerships with owner/operators and suppliers that are solid and dependable. Under the McDonald’s System, everyone succeeds.

McDonald’s “System” philosophy—the brainchild of founder Ray Kroc—is often described as a three-legged stool. One of the legs is McDonald’s employees, a second leg is the owner/operators that run the restaurants, and the third leg is McDonald’s supplier partners. The stool is only as strong as its three legs. This means that the company employees, the owner/operators and the suppliers, each support the weight of McDonald’s equally. For one to prosper, each must prosper. Kroc’s System has stood the test of time because leaders within the System have continued to honor a “System First” approach where solutions always include the consideration, “What’s best for the System?”

In the wake of the OSI shutdown in China, McDonald’s had to look no further than the trusted System to kick in with answers. McDonald’s quickly shifted to long term supplier partners Keystone Foods and Cargill Inc. to reestablish a stable source of supply in China in the short term. This is very much in keeping with how McDonald’s operates: quickly acting with established strategic suppliers that are committed to McDonald’s success at a moments notice. This is not the first time McDonald’s suppliers have come to the rescue of other suppliers. Remember the 2004 Avian Flu crisis?   McDonald’s suppliers stepped up to meet McDonald’s assured supply goals in Asia during crisis, assuring supply when virtually all of McDonald’s competitors ran out chicken.

But what about a long-term strategy? Once again – the System had a solution. OSI handed control of its China plants indefinitely to a subsidiary of a competitor, Golden State Foods Corp. California-based Golden State Foods is one of the world’s biggest suppliers to fast food companies and has been a trusted supplier to McDonald’s since the 1950s.

Reuters reported OSI said the management change was made “to help meet customer needs.” The action was confirmed by Golden State spokeswoman Shellie Frey in the Reuters report. Frey said the transfer of control to Golden State’s KanPak China unit was “a unique situation,” but added it would last indefinitely. Frey indicated Golden State will focus on increasing production at the OSI facility in Guangzhou, a city near Hong Kong in southeastern China, to help assure supply.

Golden State is bringing experts from China and elsewhere to the Guangzhou facility to assure its products meet China’s regulatory requirements, Frey said. She left open the possibility that Golden State could take over management of other OSI facilities, but said there were no talks underway about other plants.

The Reuters report also said a McDonald’s spokeswoman in the United States had no immediate comment on the management change at OSI’s Guangzhou facility. McDonald’s indicated it will increase the number of audits it conducts of suppliers in China following the OSI food scandal.

OSI and Golden State both have deep ties with McDonald’s that stretch back to the 1950s, when they began supplying food to McDonald’s. Golden State is famous for creating the Big Mac’s secret sauce.  Both suppliers grew as McDonald’s has expanded worldwide. Today Golden State is a $6 billion enterprise operating on six continents.

If McDonald’s decides cut ties to OSI in other areas, it would be historic. The OSI relationship dates back to 1955 when OSI began servicing Ray Kroc’s first restaurant in Illinois.

McDonald’s calls the removal of a strategic supplier partner an “exit,” and it is a decision McDonald’s does not take likely. McDonald’s System is based on long term, trusting relationships with its suppliers and it strives to work with existing suppliers rather than replace them.

Dan Gorsky, senior vice president of McDonald’s North America Supply Chain, described how McDonald’s thinks about supplier exits in Vested: How P&G, McDonald’s and Microsoft are Redefining Winning in Business Relationships. “We truly love it when suppliers bounce back from their poor performance periods. In every instance that I can think of, the supplier has come a stronger, more robust, more focused, more competitive and innovative business partner.” To put it in perspective, Gorsky said during his 18 year tenure at McDonald’s he could count the number of supplier exits on one hand.

Will McDonald’s exit OSI on a global basis, or work rigorously with the company to re-establish the standards they should have been upholding? A McDonald’s spokeswoman was elusive when asked, stating the food chain is evaluating its relationship with OSI and did not rule out the possibility of replacing the meat supplier over the long term.

Whatever the decision, the McDonald’s System has proven once again its resilience in the face of adversity.

Image: McDonald’s in Shanghai by Jesse Varner via Flickr CC