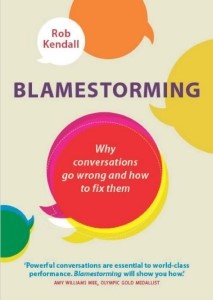 We’ve all done our fair share of brainstorming, but have you ever engaged in a robust round of “blamestorming”?

Believe it or not there is an art to blamestorming and it’s not what you might think it is, and also not exactly how it’s defined in, for instance, the Urban Dictionary: “Sitting around in a group, discussing why a deadline was missed or a project failed, and identifying a scapegoat.”

Current thinking about blamestorming is not necessarily about scapegoating—although it can definitely be worthwhile to have a group session to discuss what went wrong.

Apparently there’s a kinder and gentler way to blamestorm and there’s even a book about this, Blamestorming: Why conversations go wrong and how to fix them by Rob Kendall.

The key words? Better communications in both good times and bad. Kendall, a management consultant and communications coach based in the United Kingdom, has written a guide to achieving more rewarding and effective interactions with everyone, from boss to partner.

Even highly collaborative groups with the best intentions and most thoughtful members will eventually run into conflicts and troubles, because, well, “business happens.” And we are all human.

Kendall’s book centers on warning signs when a blamestorm is coming, and how to avoid needless conflict and unproductive scapegoating. He talks about four things that can happen during a blamestorm:

Kendall’s advice? “Don’t just be in conversations; observe them.”

My take?  Then get back to a positive partnership mentality.