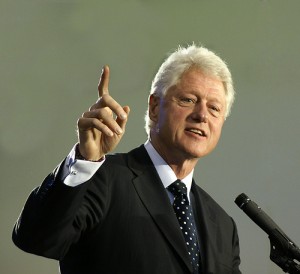 As you no doubt know by now I’ve been saying that the future of outsourcing and business success lies in collaboration, so it’s timely and nice when a former president also strongly endorses this idea.

At the recent Dell World users’ conference in Austin, TX, President Bill Clinton’s lively keynote address before about 5,000 people stressed the importance of collaboration and how society needs to get into the “tomorrow business.”

“In a world that seems to be full of zero sum games and conflict models based on trying to hold onto a yesterday that can’t be recovered,” he said, “I believe the future belongs to networks and creative cooperation.”

Clinton stated that because threats, cultural differences, debates and information are crossing borders to an unprecedented extent, “we are living in a world where we’re compelled to share the future.” He said that technology will be important — but the issue is, how are we going to share it?

“If we want the world to work,” Clinton stated, “we will need to create more non zero-sum arrangements, where we still have competition, and we still reward those who work harder or who have new ideas or are particularly gifted — but we share.”

Those are inherently Vested values – collaboration, sharing and expanding value and working jointly for the win-win.

Putting individual interests over those of the group are antiquated attitudes; they are modern geopolitical realities.

There’s much work to do on this but Clinton seems as optimistic as I am about the future of true collaboration and sharing to create and expand value: “If we can get back to the tomorrow business and do it together, we’re going to be just fine.”

The development of email and the Web formed the foundation for today’s collaboration technologies, he said. But collaboration is not just some nerdy IT goal or pie in the sky vision — it actually works in the real world across a range of different business models, as shown in the latest Vested book, Vested: How P&G, McDonald’s and Microsoft are Redefining Winning in Business Relationships (by myself and Karl Manrodt with Jeanne Kling). The book, published last year, shows that companies can indeed find the elusive “win-win” by creating relationships that are designed to create and share value.

As Clinton said, collaboration and sharing are not just nice ideas, they are compelling necessities.

Check out some of the coverage of Clinton’s Dell World keynote here and here.