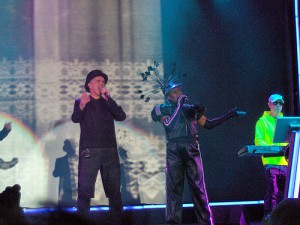 If you remember rocking out to the Pet Shop Boys you probably reached musical maturity during the 1980s.

Ah yes, the 1980s: a time of economic struggle, redistribution of wealth, corporate greed, conspicuous consumption and the rise of yuppies. Sort of like today!

One of the UK duo’s big hits, “Opportunities (Let’s Make Lots of Money)” was released as a single in 1985 and again in 1986, gaining greater popularity in both the UK and U.S. upon its second release.

The singer is looking for a partner, “someone who gets things fixed,” so asks this question: “do you want to be rich?” Further, there are “lots of opportunities” out there “if you know when to take them”, and if there are no opportunities, “you can make or break them.”

Actually, the song depicts two losers, with the “protagonist/singer” looking for a partner so that they can make “lots of money.” The actual enterprise hardly matters: after all there are many money-making opportunities out there, you just have find them, and if there really aren’t any – we’ll magically come up with something. I’ve got the brains you see?

The song apparently was written as a satire of the economic policies of Margaret Thatcher in the United Kingdom, and the economic climate of the early to mid-1980s. It cemented the Pet Shop Boys’ position as ironists in their songwriting. Give it a listen:

Though written almost 30 years ago, it wears pretty well today. While there is something to be said for finding the right  partner—and making money with your partner!—there’s much more to it than brains, looks and brawn. It’s a simplistic and ultimately losing strategy because finding the right partner is more complicated than that. For example, there needs to be trust and a “what’s-in-it-for-we” Vested mindset. There needs to be a clear understanding of intentions and mutually agreed-upon desired outcomes. The parties need to buy-in to the idea of creating, sharing and expanding value together, using all of their resources in a transparent manner.  How a company looks? Meh!

It comes down to alignment on a number of fronts, as the Vested model so aptly illustrates. Not just brains, looks and brawn; looks and brawn are fleeting and overrated in any case—better to ensure that everyone is using their brains to create an enduring partnership. The money will follow.