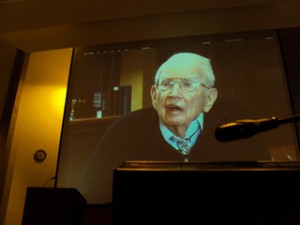 Followers of this blog and the “economics of outsourcing” series know how much I admire Ronald Coase and the contributions he has made to economic thought regarding transaction costs, total costs, getting the math right and the emergence of modern outsource contracting.

His groundbreaking work, stretching back to the 1930s, shed light on a new concept, transaction cost economics: he said it’s not enough to include only production and transportation costs as the main costs of doing business; businesses need to also consider the cost of entering into and executing contracts. This boils down to a math problem, and the lesson was that we should think about the total cost and not just the price/budget of the contract or the work that is outsourced. His work is an essential part of the foundation of Vested’s collaborative and shared value approach to business relationships.

And you can find him today in the pages of the December Harvard Business Review in an article, “Saving Economics from the Economists” that addresses the current “separation” of economics from the working economy.

Coase says that “economics as currently presented in textbooks and taught in the classroom does not have much to do with business management, and still less with entrepreneurship.” He continues that the extent “to which economics is isolated from the ordinary business of life is extraordinary and unfortunate.”

This disconnect between the theory and reality of economics—and thus its real-life usefulness as globalization and capitalism evolve—is often thoughtfully explored by other economists such as Joseph Stiglitz, Paul Krugman (both Nobel laureates) and by Umair Haque.

The isolation that Coase refers to was not the case in the past. Adam Smith’s seminal Wealth of Nations was read widely by businessmen “even though Smith disparaged them quite bluntly for their greed, shortsightedness, and other defects.”(Hmmm, it seems not much has changed in the ensuing 300 years!) As time passed, economics remained relevant to businessmen and in the twentieth century economics “consolidated as a profession.”

But at the same time, and here’s the problem, writes Coase: “the field experienced a paradigm shift, gradually identifying itself as a theoretical approach of economization and giving up the real-world economy as its subject matter.”

Economists use tools that are “too abstract and speculative to offer any guidance to entrepreneurs and managers.”  Because economics offers “little in the way of practical insight” today businesses are thus left pretty much on their own.

Government is often seen as filling this void, especially in times of crisis, to resolve tough economic problems—but as we can see in our current disjointed, partisan and ideological environment it is really not up to the task.

Today’s modern market economy, Coase states, “Requires an intricate web of social institutions to coordinate the working of markets and firms across various boundaries. At a time when the modern economy is becoming increasingly institutions-intensive, the reduction of economics to price theory is troubling enough. It is suicidal for the field to slide into a hard science of choice, ignoring the influences of society, history, culture, and politics on the working of the economy.”

Coase is a guiding force behind the New Institutional Economics.  NIE is an interdisciplinary enterprise combining economics, law, organization theory, political science, sociology and anthropology to understand the institutions of social, political and commercial life. It borrows from various social-science disciplines, but its primary language is economics. NIE’s goal is to explain what institutions are, how they arise, what purposes they serve, how they change and how – if at all – they should be reformed. In addition to Coase, Oliver E. Williamson, Elinor Ostrom and Douglass North are founding members.

That’s heavyweight company indeed. One of the ideas NIE espouses is that institutions abide by a set of principles and actions to ensure that what benefits one will benefit all. Therefore, in a free market businesses are encouraged to maximize their own gain for the benefit of society, as long as businesses work within a framework of institutions that provide collaborative, win-win principles that everyone follows. By the way, that’s the Vested way.

As we enter another uncertain and potentially volatile year, it’s comforting to see that Coase is keeping all of us on our toes.

He’s even launching a new journal, Man and the Economy, with Ning Wang of Arizona State University. Did I mention that he’s remarkable?

Happy Birthday Mr. Coase and Happy New Year to All!