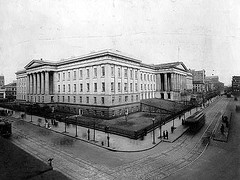 A recent Economist article explores how process of invention is changing.

Think back in time. Invention used to be more singular and more “heroic.” Inventors such as Stephenson, Morse and Goodyear were the “shock troops” of the Industrial Revolution, helping to bring “humanity from agrarian poverty to manufactured plenty. These days, though, inventor-superstars, while not absent, are fewer and farther between,” the article says.

While society may be missing today’s equivalent of innovation heroes, the good news is innovation has not slowed down. The article makes the point that the number of patents issued each year in the A.S. has remained steady. The difference is HOW the innovations come about.

A paper published in the Journal of the Royal Society Interface, by Youn Hyejin of Oxford University and her colleagues, provides some data that indeed the process of invention has changed. To put it a little simplistically, successful inventions can happen in two ways – through discovery and “recombination.”

By taking a technical dive into patent coding data since the 19th century, the balance between those two things may have changed, the Youn paper finds. About one-half the patents issued by the United States during the 19th century were for single-code inventions. These days, by contrast, nine-tenths are for inventions that combine at least two codes.

Basically, the evidence from U.S. patents indicates that invention has become a “combinatorial process.” The Economist concludes this suggests that “invention now proceeds mainly by recombining existing technologies and chimes with the idea that inventions were, in some sense, more fundamental in the past than they are today.”

Check out this Forbes article that shows how P&G approaches the art, science and practice of combining collaboration and innovation to create value.