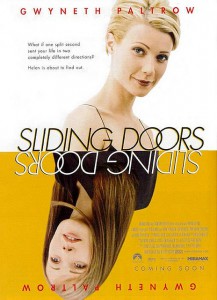 Lately I’ve been thinking about the paths taken and not taken in business and life, the choices made, and how that impacts a company’s success.

Last night I was watching Sliding Doors, a 1998 movie starring Gwyneth Paltrow and John Hannah. It is light romantic comedy/fantasy fare, but there’s a cleverly conceived message inside the fluffy story.

Briefly put, a London woman’s love life and career both hinge, unknown to her, on whether or not she catches a train, and the differing (but also converging) outcomes that can occur. The story proceeds on two parallel tracks, with the viewer left to wonder about the mysterious workings of fate and coincidence, success and failure.

From the movie trailer, these are some of the questions facing Helen (Paltrow) after she’s fired from her PR job: Have you ever wondered what might have been? Would things be different if you caught the train instead of missing it? How much would your life change if you were ten minutes early instead of ten minutes late?

So how does Sliding Doors relate to business? In a big way.

Last week I talked about the work of Steven Johnson and how having an environment that embraces serendipity plays a big role in driving innovation and prevents good ideas from falling peril to the Good Idea Graveyard.

In the Johnson post, I focused more on the process of not letting good ideas fall through the cracks. But an equally important aspect in creating a good environment is having the right attitude to see that the alternative path – the sliding door – can open a powerful new direction.

I know—life’s possibilities are infinite—but how often do we get overwhelmed by the infinite part and get stuck in ruts that we don’t even know we’re in? We say things like: “This innovation can’t work because (fill in the blank).” Or, “I don’t follow how this plan can succeed given all the unknowns involved.” Or, “It’s simply too hypothetical and I don’t do hypothetical.”

JLL’s former CEO and CFO Lauralee Martin says the results from innovation “are like an evolving story. You find savings in one area and it unlocks the door to another. If you want to get to the ultimate endgame, you leverage on previous innovations.”

In short, it’s analogous to walking through a sliding door and having the attitude and fortitude to see all the new possibilities.

So yeah, life and business is about the paths we choose, or don’t choose, the innovations that succeed or fail, the doors that close and slide open, and how seemingly different tracks can come together to create something new and exciting. And what evolves after that.