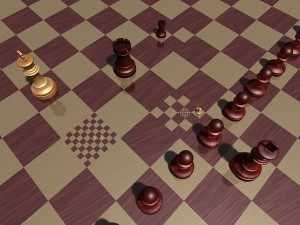 Marketing guru Seth Godin has a short blog, “The short game, the long game and the infinite game”  in which he asks, “How long is your long run?”

He continues that a short game is when people or organizations see the lens through a short ROI and “measure the world in ten second flashes, and they’re happy to do something they call generous for six seconds, as long as they get a payback before the ten seconds are up.”

A long game is when people (or organizations) “build an asset, earn trust, give before getting, and then, after paying their dues, win.”

Both the short and long game scenarios are designed to end—and to have a winner and a loser.

Godin advocates for an infinite game where the objective is to play the game itself: “Something completely different is going on. In the infinite game, the point is to keep playing, not to win.”

Organizations that play a Vested game are playing an infinite game. The objective and the opponent? To create a competitive advantage and keep winning – to beat the market and the competition – such as the way McDonald’s uses “System First” thinking with their most strategic suppliers. Even if the “game” ends, such as with the State of Minnesota’s I35 bridge rebuild or the Rocky Flat closure project, there is no winner or loser, only multiple winners. And the results and benefits of the efforts are infinite.

Seth sums it up by stating “The wrong question to ask is, ‘but how do they win?’ The right way to understand it is, ‘but is it worth playing?’”

What type of game are you playing?