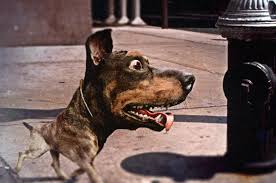 Maybe you saw the “Doberhuahau” Audi car commercial during the Super Bowl. If you are like me – you laughed at it and shared the YouTube link to with those who missed it.

But sometimes the more you look at the things, the more it helps you learn. On the surface, the commercial is quite funny. But then after I began to share it the raw undertones of the message really resonated with me. In the commercial, Audi is trying to highlight the dangers of compromise and choosing among competing ideas that on the surface look good – but in reality don’t work.

As I thought about the lesson Audi was conveying, it reminded me of my good friend Srini Krishna, the Director of Microsoft’s Finance Operations Global Vendor Management team. Srini has a great example of explaining why you can’t just “cherry pick” between the rules of Vested and expect to have a great business relationship. His analogy is “You can’t simply take the head of a lion, the neck of a giraffe, the body and strength of an elephant, and the legs of a cheetah and combine them and think you are going to get a ‘super Vested’ deal. It simply doesn’t make sense, and it definitely doesn’t work!”

The good news is people love Vested and it is a growing business model. But the bad news is that some people are tempted to cherry pick the parts that work for them and ignore the others. They are not spending the time to understand how the rules work – TOGETHER – to create the Vested sourcing business model.

Many times people will say, “I see the rules as ‘best practices’ and I only want to implement some of the best practices.  Why can’t I just take the good parts I like?”

On the surface, like the Doberhauhau, this sounds like it could be a smart approach. But it doesn’t work that way.  Leave out a rule, and there is confusion—and often chaos is the result.

Here are a couple of simple examples.

Let’s say you want to have your supplier or service provider invest in innovation to drive outcomes. You’ve carefully followed Rule 1 (outcome, rather than transaction-based business model) and Rule 3 (clearly defined and measurable outcomes). BUT you don’t want to put much upside into the pricing model (Rule 4 – a pricing model with incentives that optimize the business) to reward the supplier for its risk. The result? Even though you might be clear about the outcomes you want, don’t expect your supplier to deliver if there is no hope of a future return on investment for them.

Or let’s say you created a great pricing model with tons of incentives (Rule 4), but your operations team was not a fan of Rule 2 (focus on the what, not the how) because they could not bear the thought of losing control. In addition, the operations team felt it gave them comfort to manage the supplier with a high degree of oversight rather than insight (violating Rule 5). The result? The supplier will eventually stop trying to bring in innovations because it’s likely the organization suffers from the Junkyard Dog Syndrome and Measurement Minutiae.

I could go on and on with examples of the various “combinations” of perverse incentives that happen when you leave out of or more of the Vested Five Rules, but I won’t because I think you get the message. Cherry-picking the best part of something, whether it’s an idea, a Vested Rule, or a dog, can lead to scary mish-mash.

Vested is a different business model and it has its own rules, just like football, basketball and baseball, which have their own unique set of rules. Highly collaborative, outcome-based agreements are designed to drive innovation and create value and you need to have all five rules operating to be successful and avoid structural flaws in your agreement (see the 10 Ailments). The value creation game is DIFFERENT than the conventional buy-sell transaction-based game that is designed to exchange value (or depending on your perspective, extract value).

So, the next time all you “cherry pickers” out there want to only pick the “best practices” that work for you,  think of  the Super Bowl commercial that shows the mess that can happen when you have the good intentions to breed a dog to bring out the best features of a Doberman and a Chihuahua.

My message? Don’t compromise when it comes to following the Vested rules if you are serious about moving to an outcome-based business model. If you are not serious, try putting your toe in the water and strengthen your relationship by first laying a good foundation for your relationship with the five-step Getting to We process.