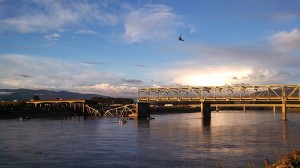 When I heard about the I-5 bridge collapse on the Skagit River in Mount Vernon, WA I thought about a lot of things—injuries, safety, infrastructure.  But with everyone safe, I turned my attention to how Gov. Jay Inslee and the Washington State Department of Transportation now have a real opportunity to show effective leadership by using a Vested approach for the rebuild project.

Why? Because the State of Minnesota and then Gov. Tim Pawlenty faced a similar, but much graver crisis after the collapse of the I-35W St. Anthony Falls Bridge, which killed 13 people and injured 145. The entire bridge had to be replaced—quickly—to get a major interstate artery across the Mississippi back up. And like WSDOT, this bridge replacement was an unexpected cost, so cost control was important.

The catastrophic bridge failure resulted in immediate monetary consequences for the state of Minnesota. The Minnesota Department of Transportation (MnDOT) Office of Investment Management estimated the daily cost to motorists at $400,000. The State Department of Economic Development estimated an additional net economic impact of $113,000 daily. And the Minneapolis Chamber of Commerce claimed the daily cost to business exceeded half a million dollars.

Gov. Pawlenty challenged MnDOT to complete a replacement bridge within 18 months. Considering it typically takes that long (or longer) just to identify the scope of a project the size of the I-35W Bridge, MnDOT approached the rebuild in a radically different way. MnDOT decided to employ a rarely used law (Minnesota Statute §161.3410) that granted authority to use a best value approach versus the conventional cost-plus lowest bid approach. This opened the door for MnDOT to follow the Vested business model for the procurement and management of the bridge replacement.

MnDOT selected Flatiron Manson a joint venture between Flatiron Constructors, Inc. and Manson Construction Company, as the contractor and architect Linda Figg of Figg Engineering. (If the name sounds familiar is it because Manson is the same construction provider that is currently doing the 520 bridge rebuild that has been plagued with problems.)

As it turned out, the Governor was slightly off: it took less than 14 months to rebuild the I-35 span; the 10-lane 504-foot bridge opened to traffic in September, 2008.

Incentives played a key role in getting the project done below both the original monetary and time estimates. Pricing a project the size of the I-35 bridge project can be contentious. MnDOT and Flatiron Manson used a Vested shared risk/shared reward philosophy. As a base, the agreement relied on a firm fixed-price base contract of $233.8 million. The fee represented MnDOT’s maximum cost liability and the only guaranteed payment for the contractor.

A key incentive for Flatiron Manson was speed because time was money. A “cost” of $200,000 per day was assigned for project duration. If the bridge opened prior to deadline, Flatiron Manson would earn $200,000 for each day saved. If the project exceeded the deadline, $200,000 per day would be deducted from Flatiron’s earnings. Flatiron Manson was willing to accept the risk because it was confident its professional experience would prevail to earn incentives and increase profit. The incentives prompted the firm to work around the clock, which meant good jobs and extra pay for workers. As long as safety and quality remained high, it was a win for everyone.

More opportunities for bonus payments and incentives were available in areas of quality, safety, and exceeding expectations. As Flatiron Manson achieved cost savings, they shared in the savings as long as they came under the agreed upon $234 million.

The result? The job was finished 90 days ahead of schedule, earning a Flatiron Manson $25 million in incentive payments, or 92 percent of the incentive pool.

Now the I-5 Skagit River bridge collapse is nowhere near the scale of what happened in Minnesota. It’s a small bridge in a rural area of Washington, and a small section of it went down after a truck hit a steel beam. Still, an estimated 77,000 vehicles cross the bridge each day and I-5 is the major corridor for north-south traffic in the Pacific Northwest.

Initial estimates reported in the Seattle Times said there were three injuries and that it would take several weeks for a temporary fix, and probably much longer for the permanent repair of the bridge.

“We Washingtonians are going to have to do what we do best, which is to hold together, to show strength of character and a good deal of patience,” Gov. Jay Inslee said in a late-night news conference at the scene.

“We will be involved in a vigorous and diligent effort to get traffic flowing again through the Skagit bridge corridor and I will issue an emergency proclamation to make sure we have the resources to do so as quickly as possible.”

That’s a good start, but I challenge the Governor to take a lesson from the Minnesota experience, and quickly adopt the same Vested approach that was used so successfully in Minnesota.

I urge the Gov. Inslee and WSDOT to read more about the I-35 story as featured in Vested: How P&G, McDonald’s and Microsoft are Redefining Winning in Business Relationships.

See “Vested For Success: Minnesota Turns 1-35 Bridge Tragedy into Triumph” for an excerpt of the case study. I’ll be happy to share our longer and more formal teaching case study with anyone that is involved with the State of Washington’s bridge rebuild. If anyone knows Governor Inslee – let him know; I’d be delighted to take his call!