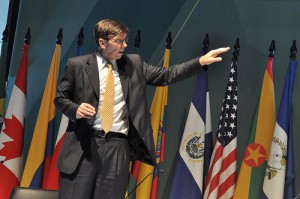 Last time I talked about Harvard Professor Clayton Christensen’s disruptive innovation as described in his book, The Innovator’s Dilemma. Being a fan for several years now, I can’t wait for his new book, The Capitalist’s Dilemma to come out, which basically calls for a large dose of disruptive innovation for macro-economics and the free market system.

Christensen talks about this new dilemma in a recent interview in Wired by Jeff Howe, in a Huffington Post article by Diane Francis and in a video presentation he gave earlier this year at the University of Virginia School of Law.

As with the invention of the PC or the Internet or mini steel mill, current economic conditions are transformative and require recalibration and re-framing of strategies, policies and political judgment. Christensen calls this the “capitalist’s dilemma” and says that the relatively jobless economic recovery in the U.S. and elsewhere is the new normal, and thus presents serious political and social consequences.

The Innovator’s Dilemma pointed to a fatal flaw in business logic. Companies focus on things that have made them successful because that is where the money is. They are often blind or resistant to new ideas and innovations because it disrupts the status quo. That of course is a major problem in the outsource arena and same idea applies for capitalism and the global economy.

The Capitalist’s Dilemma looks at what Christensen describes as the current economic paradox: economic metrics that appear healthy, especially company balance sheets—but why aren’t things going better? Why is the global economic recovery going so slowly and perhaps in danger of falling back into recession? Is it a severe and massive case of failing to agree on clearly defined and measurable outcomes (Rule #3) while focusing too much on transactions (Rule #1)? Maybe so.

Christensen says, “There just is something fundamental that has gone wrong with our economy.” There’s too much focus on creating and building capital and not nearly enough on using—maybe risking is the better word—that capital to empower innovation. (The UVa video is more than 50 minutes long but I heartily recommend it—it is fascinating and well worth the time investment.)

He explained it this way in the Wired interview: “It looks like the economy is emerging from the recession in an exciting way, but we’re not creating more jobs or income for the average person. And in all humility, I think I have articulated a simple model that explains why. The bad actors are business school professors like me who have been teaching people what I call the Doctrine of New Finance. We’ve encouraged managers to measure profitability based on a return on net assets, or return on capital employed.

“That encourages companies to liberate their capital, so they invest in efficiency innovations, which means they can make more money with fewer resources.”

“What the economy ultimately needs are empowering innovations—like the Model T, the transistor radio,” he says. “Empowering innovations require long-term investments, which tie up capital for years and years. [Instead] companies are using capital to create more capital, and consequently the world is awash in capital but the innovations we need to advance aren’t there.” And even if there is robust growth, “there won’t be job creation.”

This is really exciting—the idea of empowering innovation and putting capital investment to work for innovation, rather than simply creating more capital to line business’ coffers is right in the Vested sweet spot.

That’s because Vested ultimately is about disruption of the old ways, business transformation and collaborative innovation that takes a calculated risk to empower everyone.