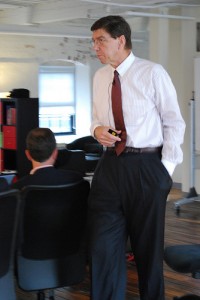 I can’t believe it has been 16 years since Clayton Christensen rocked the business world with his groundbreaking book, The Innovator’s Dilemma.

The subtitle of the book is revealing: When New Technologies Cause Great Firms to Fail. His book was a bestseller in 1997 and received the Global Business Book Award for the best business book of the year. I’ve been a fan of Christensen for some time and his innovative ideas about innovation are an important element of Vested. What is prompting me to write about him now is a recent interview with Christensen in Wired by Jeff Howe.

Christensen explains in the interview that big companies often fail not because they do something wrong, but because they do everything right. Maybe a bit too right, and a bit too cautious. Yes, it is counterintuitive, but The article explains companies are “trained to focus on what he calls sustaining innovations—innovations at the profitable, high end of the market, making things incrementally bigger, more powerful, and more efficient. The problem is that this leaves companies vulnerable to the disruptive innovations that emerge in the murky, low-margin bottom of the market. And this is where the true revolutions occur, creating new markets and wreaking havoc within industries.”

The Innovator’s Dilemma points to a fatal flaw in business logic. Companies focus on things that have made them successful because that is where the money resides. They are often blind or resistant to new ideas and innovations because it disrupts the status quo.

I think it is important for companies and service providers to realize that it’s only a matter of time before disruptive innovation takes hold in the world of outsourcing. The outsource business model is ripe for a major transformation in innovation, and in the way we think about long-term thinking and innovative investment.

I’ve been preaching—and teaching!—for some time now that the outsourcing business is model is broke: when gainsharing is the first thing that companies think about when the subject of innovation comes up, that’s a huge problem. And when companies can’t dig themselves out of the old transaction-based mindset and model—which stifles both efficiency and innovation—that’s another huge problem!

The Vested model embraces the Chrstensen’s idea of disruptive innovation because of collaboration and results based on sharing vale and achieving outcomes; it relegates bean-counted transactions to the dustbin. Simply put Vested, is well, a disruption that is well-overdue in the outsourcing industry.

And that’s why I’m excited to see what Christensen has say to in his upcoming book, The Capitalist’s Dilemma, which will look at what he calls the “current economic paradox”: economic metrics that look fine, especially company balance sheets, while the economy remains mired in the doldrums for small companies and the average worker.