I’m a huge fan of Malcolm Gladwell. One of his 2009 New Yorker articles has been circulating around the internet of late and I paused to read it (again). The title is “How David Beats Goliath: When underdogs break the rules.”

He uses the story of the Redwood, CA National Junior girls’ basketball team, which achieved glory and lots of wins by playing the game unconventionally—by using the full-court press all of the time to rattle, discombobulate and continuously prevent far superior teams from playing to their strengths, and thus to win easily. It was controversial and viewed by opposing coaches as unfair—just short of cheating.

Of course it wasn’t unfair or cheating; it was David finding the best way to beat Goliath, and not playing Goliath’s game. 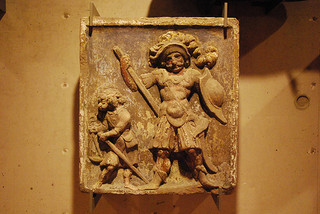 Gladwell writes that David’s victory over Goliath, “in the Biblical account, is held to be an anomaly. It was not. Davids win all the time. The political scientist Ivan Arreguín-Toft recently looked at every war fought in the past two hundred years between strong and weak combatants. The Goliaths, he found, won in 71.5 per cent of the cases. That is a remarkable fact. Arreguín-Toft was analyzing conflicts in which one side was at least ten times as powerful—in terms of armed might and population—as its opponent, and even in those lopsided contests the underdog won almost a third of the time.”

David won by breaking the rhythm of his encounter with Goliath. For one thing, he speeded it up by running straight at the giant, which froze Goliath, making him a better target. Basically, like the girls basketball team, David pressed the issue. “That’s what Davids do when they want to beat Goliaths,” Gladwell says.

So how does this relate to Vested?  And why would I be advocating not following rules when I wrote a book on FOLLOWING the five rules of playing a win-win Vested game? Vested is a non-conventional game: it challenges the conventional transaction-based ways of doing business. When you apply the Vested Five Rules, you are in essence changing the nature of the game – just as the girls did in Gladwell’s article. Vested – like the girls – applies the extra effort—the full court press, if you will—of instilling and executing trust and collaboration as a constant both in your philosophy, in your strategic planning and in your day-to-day operations.

In short – playing by the Vested rules is akin to the way that the girls and David changed the nature of the game.