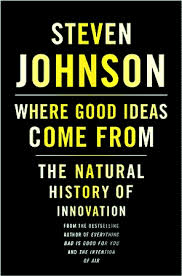 Steven Johnson, in his book Where Good Ideas Come From: The Natural History of Innovation, talks about great ideas such as the pencil, the printing press, Google and the flush toilet and wonders how flashes of innovative brilliance originate.

Yes, there’s the proverbial light bulb moment of pure genius, but Johnson is more concerned about the “space of innovation,” the approaches, patterns and commonalties “that seem to appear at moments of originality.”

What he discovered is that rather than the sudden full-bloom burst of pure genius, great ideas often need time to germinate along with other similar ideas.

One of those patterns, the “slow hunch”, is especially interesting to me and is a great counterpoint to the flash of genius that might never come, is maybe only one-half of a good idea, and might not even be identified as such.

But let his words speak for themselves in this short YouTube video:

As Johnson says, great ideas might take 10-12 years to mature and they “normally come from the collision between small hunches so that they form something bigger than themselves.”

So the task at hand for us is to create the systems that allow those hunches to come together and become great. This is where creating an environment for innovation is necessary, such as P&G’s award-winning approach, (i.e., it takes work, thought and partnership!).

Johnson writes, “We are often better served by connecting ideas than we are by protecting them.” The heart of the matter is that “when one looks at innovation in nature and in culture, environments that build walls around good ideas tend to be less innovative in the long run than more open-ended environments.” Again the P&G example comes perfectly to mind: it encourages innovative ideas from within and from outside its walls.

Johnson says connectivity is the primary engine of creativity.