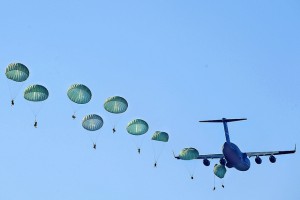 Ever wonder why parachutes never fail or why there aren’t any incompetent fugo (pufferfish) sushi chefs? Oliver Payne, writing in the UK’s The Hunting Dynasty, a behavioral insight and communication agency, has one word for this—incentives.

Of course further explanation is necessary. On parachutes and a 100 percent success rate, Payne—the author of Inspiring Sustainable Behaviour: 19 Ways to Ask for Change—says: “US parachute packers during WWII took enormous pride in their 99.9% parachute-opening success rate. In their view, one paratrooper out of a thousand dropping like a stone was not a bad failure rate (obviously disputed by the paratrooper in question, who’s ‘failure rate’ is 100%).” But any losses due to parachute failure is not good, so the obvious task was to achieve a perfect success rate.

“How do you do that? You change the framework: Once a week parachute packers were asked to make a jump with a parachute. But not one of their own parachutes. One chosen at random. From anyone of the packers.”

The same idea applies to the pufferfish chef. Pufferfish have been consumed in Japan for centuries, but it is lethally poisonous if prepared incorrectly—there is no antidote and death occurs quickly. Obviously, it’s not to be trifled with, but how do you assure that that the pufferfish consumer won’t die?

Payne writes: “Only certified chefs can prepare it – and therein lies the most absolute incentive-framework on the planet: For the final exam, the chef must eat the fish he has prepared. You can guarantee all fugu chefs are excellent, by the very fact they are alive.”

In both the parachute and the pufferfish cases, the incentive framework defines the outcome.

This is what Vested does, but with a big difference: The key is to start with defined and desired outcomes, and then teach people how to architect the right framework.

In the parachute analogy, the framework—based on activities—defined the outcomes. .

While an incentive framework is probably not a matter of life or death as it was in the parachute case—in the business world it can mean the difference between success and failure.