Wait! What is that you ask? The latest white paper from the University of Tennessee, the International Association for Contract and Commercial Management (IACCM) and Lindahl Law Firm explains why relational contracting is necessary to get past this paradox.

What exactly is the “contracting paradox?” In the just-released white paper, “Unpacking Relational Contracts: The Practitioner’s Go-To Guide for Understanding Relational Contracts,” it’s defined as the “delusion that we write contracts to make plans, but we cannot really plan accurately. And, as a nice twist, we trick ourselves into believing that we can plan.” 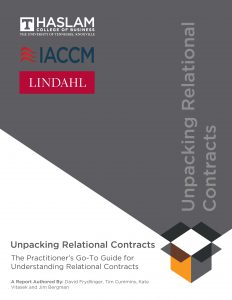 This is a fairly recent phenomenon, because for centuries much of the world ran on “handshake deals,” especially with respect to buyer-supplier relationships. In the early 1960s the legal scholar Ian Macneil coined the term relational contract, referring to the social contract of moral obligations guiding business behavior that Professor Stewart Macaulay and others had defined.

But Macneil was in the minority. The majority of legal scholars and practitioners began what would be a significant trend to create more formalized, or “complete,” contracts to document business agreements. As the decades passed, contracts grew longer and more complex, including more and more detailed plans trying to deal with an endless list of “what-if?” questions. As informal moral norms were replaced with formal contractual obligations, the original notion of the relational contract was replaced with the transactional contract that now dominates as the primary approach for contracting. Today, it is not uncommon for a contract to be hundreds, if not thousands, of pages long.

In that kind of environment it’s easy to see how paradoxical complications can emerge. In fact, the Nobel laureates Oliver Williamson (2009 recipient) and Oliver Hart (2016 recipient) astutely advise that by nature

Simply put, extensively negotiated agreements fail to deliver the goods. Indeed, it is argued by some (including IACCM and University of Tennessee scholars) that seeking the complete contract actually detracts from the chances of success. You don’t have to look far to see the trade press often reporting on good deals gone wrong.

Thus there are increasing questions surrounding the effectiveness of contracts and the contracting process. And this is where the contracting paradox enters. “To succeed in business, we cannot really give up planning,” the paper says. But we also know how poor we are at planning for every eventuality. To abandon the detailed transactional contracts and return to world of handshake deals is not really possible or viable in a globalized economy.

So what to do?  The answer is create what Oliver Williamson refers to as “hybrid” agreements that embody the essence of a relational contract. The bottom line: . The Unpacking Relational Contracting white paper brings practical insights and understanding into the why, what, how, and when of relational contracting.

The 50-page paper is divided into five sections:

Part 2: Seeks to explain why organizations need to make the shift to relational contracting

Part 3: Aims to help you understand the “what and how” to begin to develop a relational contract

Part 4: Provides guidance for when to use a relational contract

Part 5: Shares a short conclusion and call to action with some succinct advice for getting started

This is a practitioner’s guide—not an academic exercise!—that will help individuals and organizations better understand relational contracting. We believe it will become the foundational reference guide for relational contracting. With this goal in mind, IACCM, UT and Lindahl Law Firm are making the paper available as an open source document (i.e., a free download from the Vested library) and encourage you to share it with your colleagues, clients, customers, suppliers and business partners.