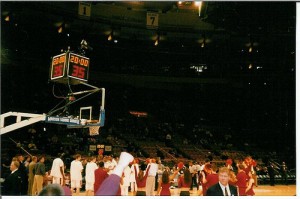 If you’re a college basketball fan—and who isn’t during March Madness?— you’ve probably heard of the four corners offense, a stalling strategy designed to ensure victory for the team using this type of offense.

For the uninitiated, four players would stand at the corners of the offensive half-court while the fifth would dribble the ball in the middle—endlessly. The opposing team was taken totally out of its game and rhythm. It was a controversial and boring strategy that froze everything and took all the fun and athleticism out of the game.

The tactic was perfected and popularized by North Carolina’s legendary head coach, Dean Smith, in the early 1960s. Once Carolina got a lead the game was essentially over because the Tar Heels’ ball-handlers would control the ball until time ran out.

After extreme results like an 11-6 Tennessee win over Temple in 1973, pressure mounted on the NCAA to implement a shot clock for college basketball. But it wasn’t until 1985 that the NCAA finally introduced a 45-second shot clock for the men’s game; it was reduced to 35 seconds in 1993. Today, the four corners offense is still used on occasion and in certain situations at the end of games, but it is no longer a factor in college basketball.

So how does this relate to the business world, and in particular Vested?  Stalling should never be a factor in your business negotiations or relationships. Stalling in negotiations is simply unfair play and deteriorates trust.

How often have you seen obvious and self-interested stalling tactics in the business world, especially when two companies are trying to forge a relationship and get a contract signed? It’s really just brinksmanship or waiting for the other side to blink—especially when one party perceives itself as being in a more powerful position.

In fact, this kind of stalling is sort of like the new or used car salesman who stalls the deal while he goes back to the manager for permission to cut the price or get some concession: what often happens is that that the “higher ups” do not like the deal that “lower level” people have negotiated. Everyone comes away with a bad taste in their mouth.

This kind of approach in business relationships is destructive.  Under a Vested approach, this situation is eminently avoidable through proper Guardrails and by ensuring that both sides sit side by side at the table as they construct the deal—together. In a relationship based on collaboration and trust, stalling and stonewalling to get the best possible deal—to “win”—needs more than a shot clock—it should never occur.

Now I am sure there are plenty of classically trained negotiators out there who will disagree with me. That’s why Jeanette Nyden, David Frydlinger and I have tackled this subject in our latest book, Getting to We: Negotiating Agreements for Highly Collaborative Relationships, which will be published this year by Palgrave Macmillan.