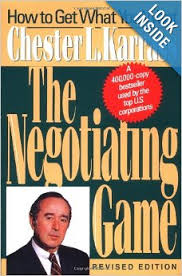 In last week’s Halloween post I wrote about the negotiation I had with my son about his costume. It made me think about some of the downright scary negotiation tactics companies use to help them get a better deal. I did a little researching and ran across Chester L. Karrass’ website, which has a negotiations glossary. I was humored as I looked through it and was reminded how backwards some of these negotiations tactics are when it comes to crafting a collaborative business relationship.

Think about it. Should bluffing, lying, misinformation, delaying and power-play tactics have a place in modern negotiation? No wonder so many business relationships are not productive when parties employ gamesmanship out of the gate as they work to establish their relationship.

Karrass – famous for his book The Negotiation Game – is widely credited with formulating the most successful negotiation seminar in the U.S. The reason? For one thing he’s been writing and teaching about negotiation techniques for more than 45 years, and a large number of Fortune 500 companies follow his advice.

But why negotiate as if it’s a game? If everyone approaches a negotiation as a game doesn’t that imply that there will be winners and losers? I have to challenge the famous quote on his website and book that states “in business as in life, you don’t get what you deserve, you get what you negotiate.”  That, it seems to me, is a bit scary, harsh and too cynical for my blood. It may be a typical view of the way the world works, but conducting seminars with that as the premise is a bit scary if your goal is to develop a sustainable business relationship, such as with a strategic supplier or outsourcing partner.

I’m not implying that Karrass advocates any of the old school tactics he shares in his negotiations glossary. But I do openly challenge his analogy that negotiating is a game.

Let’s take for example the negotiations concept known as a BATNA, or best alternative to a negotiated agreement. Rather than hold back our BATNA, what if the negotiating parties shared guardrails upfront on why they wouldn’t do business, and try to create value rather than simply trying to exchange value—or even worse, extract value?

Karrass does have credentials, including a doctorate from the University of Southern California, and long experience in negotiation. So I don’t want to dismiss or disrespect him. His blog, Negotiation Space, has useful insights, tips and tidbits.

For example, he notes the following regarding “expectations”: “Every demand, concession, threat, delay, piece of information, deadline, authority limit and question has an effect on people’s expectations.”

It’s interesting that he doesn’t say what kind of effect — I’m fairly positive that most of those points would result in a negative effect!

One tip I definitely agree with Karrass on is that you need to “build some thinking time into your negotiations. Never go into a negotiation without first considering how to give yourself time to think. Build a thinking buffer to keep yourself from being pushed into a decision.”

That’s sound advice in order to avoid negotiations that turn into what Karrass terms a “Ping-Pong tournament.” He adds, “The person who has time to think, thinks better!”

A Vested agreement by design requires collaborative thinking and preparation as the parties consider their Statement of Intent and formulate their Desired Outcomes. Win-win doesn’t happen by accident—it takes thought, preparation and commitment. In fact, Vested is the template for effective joint thinking during and after the negotiation.

Here is a tip for you. The next time you go to the negotiating table check out Karrass’ negotiations glossary and share it openly and candidly with the party you will be negotiating with. Then go through and agree on which tactics you will, or will not, use. I also suggest picking up a copy of Getting to We: Negotiating Agreements for Highly Collaborative Relationships, my latest book, co-authored with Jeanette Nyden and David Frydlinger.