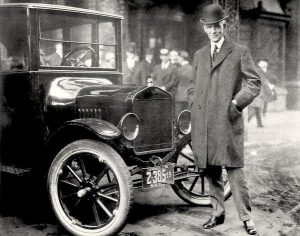 In 1914 Henry Ford had a great idea – the mass production of automobiles for the masses. But he also knew that he needed highly productive workers – and a lot of them – to make that idea happen.

So, he came up with another great idea, in fact something extraordinary and unheard of: pay employees $5 a day for an eight-hour work day.

As recounted by NPR, thousands lined up in the bitter cold in January 1914 to take Ford up on his offer. That was more than double the average factory wage at that time, translating to roughly $120 in today’s money.

Why? It helped America’s 20th century middle class take off. But Ford didn’t introduce the $5 workday because he was a nice guy, according Bob Kreipke, corporate historian for the Ford Motor Co. “It was mainly to stabilize the workforce. And it raised the bar all over the world.”

Kreipke noted that to understand why Ford thought this was a smart move in January 1914, you have to go back to another huge shift that had happened a few months earlier: by 1913, Model T production totaled 200,000 — a feat made possible by the creation of the first moving assembly line. Conveyor belts transported small parts to workers, each of whom performed a specific task.

This tremendously sped up production, but Ford faced a problem: Ford had standardized production, but he hadn’t standardized his workforce — one willing to do the same repetitive, specialized tasks hour after hour, day after day. Ford gambled that higher wages would attract better, more reliable workers.

The benefits were almost immediate. Productivity surged, and the Ford Motor Co. doubled its profits in less than two years. Ford ended up calling it the best cost-cutting move he ever made.

And another facet of Ford’s genius was that the high salary enabled his workers to buy the Model-Ts they made.

That positive feedback loop gave rise to a broad, prosperous middle class. More than one hundred years later, the middle class is under pressure on a variety of fronts that include wage erosion and automation. Perhaps it needs a reboot and another great idea to take it through the 21st century.

Great ideas foster—and in fact lead to more great ideas to implement them and make them work. After more 100 years of basically taking the brains out of the workers and suppliers, we need to face the 21st century and recognize that perhaps the next wave of innovation will come from higher wages because we are buying innovation, not just standardized butts.